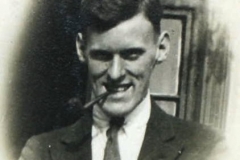 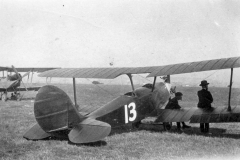 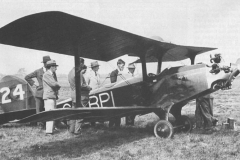 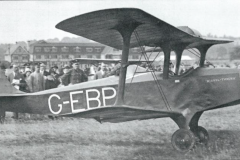 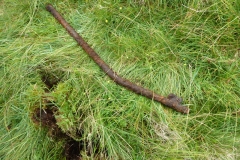 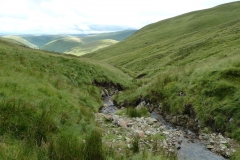 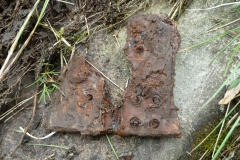 The ANEC IV Missel Thrush, the only one of its type, was built in 1926 by the Air Navigation and Engineering Company (ANEC) at Addlestone in Surrey. It was designed by John Bewsher for the Lympne light aircraft trials in 1926, a Daily Mail competition for two-seater aircraft fitted with engines weighing less than 170 lbs.  The aircraft was fitted with a 35 hp three-cylinder Blackburne Thrush engine, but it did not make the competition as the undercarriage collapsed in a taxiing accident.

When ANEC went into liquidation in 1926 the aircraft was purchased at auction in January 1927 by Guy Neville Warwick, after which he towed the aircraft to his Harpenden home with his Argyll car.  Mr Warwick, a Barrister-at-law, was a member of the London Aero Club based at Stag Lane aerodrome and he had visions of competing in the Kings Cup Air Race the following year.  At his home Mr Warwick installed a 5 cylinder 45hp Anzani engine, and it was flown for about 20 hours in this configuration.  However just prior to the King Cup Air Race the engine was changed for a third time and a more powerful 80hp Genet II being installed and it received its Certificate of Airworthiness the day before the race.

The 1928 Kings Cup Air Race was to take part on the 20th and 21st July with the 38 entries competing for the trophy over the 1,096 mile course.   The first stage on 20th July began at Hendon and took a route north to Norwich, Birmingham, Nottingham, Leeds, Newcastle and finishing at Glasgow.  The second stage on the 21st July left Glasgow and took a route south to Liverpool, Bristol, Southampton, Lympne and finishing at Brooklands.  By far the most difficult stage was from Newcastle to Glasgow which took a route over the mountains of the English/Scottish border, an area often shrouded in low cloud and with few places but put down should the need arise.

The entries were published in The Times on the morning of the first stage with the more powerful aircraft given a handicap.  The list of competitors, their aircraft, take-off times and handicaps were as follows:

Mr Warwick left Hendon just after 09:21 hours in 24th place and took the weaving route north to Norwich.  He lost ground during the first two legs but by the time he arrived at Newcastle he was in 22nd place.  Mr Warwick left Newcastle at 17:30 hrs and began the final leg to Glasgow which took a direct line over the Cheviot Hills.  There was no immediate concern when he failed to arrive at Glasgow on the Friday evening, as eight of the competition had already given up due to accidents or technical difficulties before reaching Newcastle.  Those who had made it to Glasgow had reported poor weather conditions over the border hills, in particular the hills around St Mary’s Loch, and it was thought that Mr Warwick had possibly become lost and was forced down. However when there was no news come Saturday concern began to grow and a number of members of Newcastle and Glasgow Aero Clubs began to search the route for any signs of the missing ANEC.  Word was also put out in the local communities and the Police were patrolling the countryside.  The search was made all the difficult as the aircraft was painted in a dark earth scheme which blended in with the countryside.

On the morning of the 23rd July the news everyone feared was received that a body and aircraft wreckage had been found by a shepherd on the hills near St Mary’s Loch.   It was the young shepherd of Meadowland, David Brown, who found the shattered remains of the aircraft.  He had been working only 200 yards from the spot on the morning of the crash and he had heard the humming sound of aircraft pass overheard, but owing to the cloud was unable to see them.  David had been on his usual round tending to his sheep when he discovered the aircraft close to the summit of 2,700ft Broad Law near Meggethead.  The wreckage was scattered over an area of 150 yards with the fuselage upside down and the engine some 100 yards further down the hill.  Mr Warwick’s body was further down the slope close to a stream, his leather helmet lying nearby, from the nature of his injuries it was clear this death must have been instantaneous.

A post crash investigation found that the aircraft had struck the hill near the summit with the port wing tips where a large gouge was found, it had then cartwheeled into its nose, bounced a number of times before coming to rest upside down 150 yards due south of where it first struck.  Scattered between the initial impact point and engine were fragments of wood and metal and the wings had been totally destroyed.

The investigators came to the conclusion that Mr Warwick had spotted the hillside too late and in executing a sharp turn to port, the port wing tips had struck the ground causing the aircraft to crash out of control.  The condition of the airscrew blades and hub bolts and the distance these pieces had been thrown suggested that the engine was running under significant power at the moment of impact.

To this day some tiny pieces of the Missel Thrush can still be found scattered down the slope.  Using the accident report as a guide it is easy to visualise the crash site at the time.  The very small pieces which remain are very hard to find and often buried.  Reports that the engine remained on the mountain have proved unfounded.