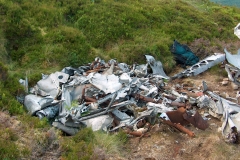 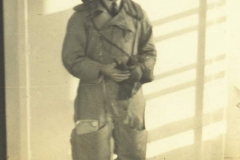 At 14:30 hours on 03.11.41 four Hurricanes took off from RAF Acklington for a formation flying exercise. On the return leg heavy cloud was encountered over the Scottish Borders.

The flight consisted of Flt Lt May flying Z2639, Sgt Ball flying Z2667, Sgt Barclay flying Z2772 and P/O Mehta flying Z3150 who was leading the formation. On landing back at base at 15:20 hours Hurricane Z3150 was missing. Immediately Sgt May refueled and took off again in order to search for P/O Mehta’s aircraft, Sgt May returned at around 17:40 without success. A further two flights took off that day to search for the missing aircraft but both returned with the same results.

A local shepherd however had seen the aircraft crash and had informed Roxburghshire Police. The Police reported that the aircraft had flown into the hillside at incredible speed, because of which only the tail unit was visible. This is possibly why identifying the aircraft posed such a problem resulting in the RAF not being informed of the accident immediately. P/O Mehta’s body was discovered some distance from the impact point, buried under 8 foot of peat.

P/O Mehta was Indian, the son of Karam Chand Mehta, of Lyallpur, Pakistan. He was cremated in Newcastle’s West Road Crematorium.

Some sizeable remains can still be found at the crash site, although some of the larger items have vanished in recent years, including the complete rudder. A memorial has recently been erected at the crash site.